Whoa. Didn't realize they were that hot.

It is what passes for genius in NHL circles, absolutely.

Stacked, though I'd like to see a Kivi-Lil pairing in a perfect world.

Kivi wont stay behind Harpur for long. Gravel is pretty good though and that's a really good AHL pairing so who knows.

Harpur could be a healthy scratch by the end of the season on that team. Dermott back could mean marty back to the A.

Would not be surprised to see Harpur sent to the Growlers. The guy is just awful and Keefe is good at his talent evaluation.

BeLeafer said:
Would not be surprised to see Harpur sent to the Growlers. The guy is just awful and Keefe is good at his talent evaluation.
Click to expand...

And keefer has no love for plugs either. You can either play hockey or you cant. Standing in the right spot while long and heavy isnt a virtue to Keefe

Yep. I so want him behind the Leafs bench.

Goof looked like he elbowed him. Really wish they'd crack down on the knuckle draggers in the A. 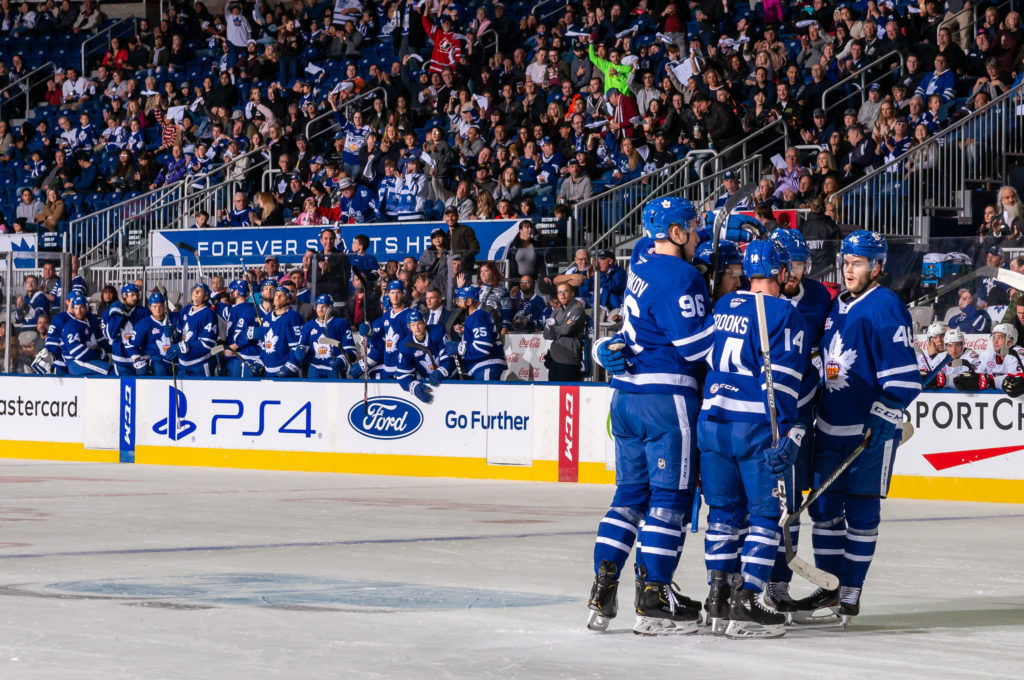 Adapt or die: Why the Marlies, despite historic success, are...

The Marlies will be less of an entry point for the Leafs' prospects and more of a battling ground for NHL depth.

After two minor-league championships in the span of roughly a calendar year, Laurence Gilman stepped out of the Marlies’ locker room three hours before puck drop on a new season to say this was the start of a new era.

This season, Gilman’s second full year in charge of the Leafs’ affiliates alongside his role as the NHL club’s assistant general manager, was “definitely” the first with a true three-tier system, he said.

The formulas that turned the organization’s two affiliates into models for their respective leagues were old news. The Leafs think they’ve found an even better path forward.

“We’ve referred to it as a baseball model where our players will begin their professional careers at the Double-A level in Newfoundland with the Growlers, and good examples of that is with Joe Duszak, Mac Hollowell and Justin Brazeau,” Gilman said. “They’ll start their careers there, we’ll monitor their performance closely, we’ll be there on a regular basis, our player development people will be there, and in time they’ll make their way, hopefully, from Newfoundland to here and eventually from here to the Leafs.”

It all sounded like Billy Beane (played by Brad Pitt) telling his head scout Grady Fuson (played by Ken Medlock) to “adapt or die” in “Moneyball.” Only the Marlies aren’t the poor team “50 feet of crap” below everyone else. They’re the Yankees.

They’re the team that started with Kenny Agostino, who last year spent a chunk of the season playing on the New Jersey Devils’ first line and two years before that won the AHL scoring title, on their so-called third line.

The new vision is clear: The Marlies will be less of an entry point for the Leafs’ prospects and more of a battling ground for NHL depth. The road for the organization’s prized young prospects will now be a longer one.

“We knew with the construction of the Leafs and the salary cap that we were going to have to find cost-efficient players at the bottom of our lineup, particularly with respect to the forward group. And we felt it was incumbent upon us to find players who could play at either level, whether that’s the NHL on the fourth line or potentially be first- or second-line players for this group,” Gilman said.

The Leafs don’t believe that approach will stifle the team’s prospects, though.

Instead, they hope it helps them blossom in more prominent roles with their respective teams as they progress one level at a time.

“The American Hockey League is a very difficult league. There are veteran players. We have Matt Read who is playing for us, who has played 449 games in the NHL,” Gilman said, pointing to Duszak as a player who will benefit from starting in the ECHL because of the expanded opportunity he’ll be afforded.

“(Duszak’s) going to play power play, he’s going to play five-on-five, he’s going to kill penalties, he’ll be on the ice late in a game when we’re down a goal and when we’re protecting a lead at the end when we’re up a goal. It’s much better that they play more meaningful minutes and larger minutes at that level, get themselves grounded, and then come up and play and are able to play on an everyday basis here.”
Click to expand...

I'm fine with challenging the prospect development status quo here. In previous years, anyone who stepped foot in the ECHL usually had 0.0% chance of making the NHL down the road but as long as it's part of a proper development plan and not just used as somewhere to stash prospects who aren't really prospects, I think there's a good chance of this working. The hard part is ensuring that the prospects in the ECHL are getting access to the calibre of skills coaching and development in Newfoundland that they would have received in the AHL.

Great article - but too much back-patting there. Would have been better to announce it after a Cup win, using depth players as examples that were groomed by the "new era" of player development.

It's tough to not address the theory of it now though when you're sending actual legitimate prospects to the ECHL this season. When the ECHL is largely considered the death knell for a young hockey player's progression, and you're sending Scott, Duszak, Hollowell, etc there, you're going to get some questions. Better to just come out with it, no?

The only people it should matter to are the prospects - and they've already seen the development system at work (2x championships). This is another way that the Leafs can outspend a good chunk of the league, why flaunt it?

Public perception matters though, even to the kids who are being sent to the ECHL. Put yourself in the shoes of one of these kids (like Duszak specifically, who signed here as a free agent). You're not expecting to play in the ECHL which has forever been considered a horseshit league where teams send their goons and non prospects. It's a much easier pill to swallow when the organization is saying the same things publicly (that they're trying to be ahead of the curve and using the ECHL as an actual developmental league) as they're telling you in private when they're sending you down there. These are guys with friends, families, etc and they're chasing their dream of being a NHL player. You can count the current number of NHL'ers who spent 5 seconds or more in the ECHL on maybe a couple hands, this is a lot easier to swallow if the org is out in public banging the drum with the messaging here imo.

Turns out that Augostino is out with a concussion. No word on any discipline for the goon in the above video.

It's early, but damn a second round home run from Duby and co would be pretty sweet.